I knew a wash ‘n go was going to be a task as my hair continues to grow longer, so I kept putting it off.

But my jar of Kinky Curly Curling Custard kept shouting Use me, Use me! every time I opened my hair product drawer.

Finally, I gave in to the temptation.

Let me preface by saying, I was completely aware of all that could go wrong with the application because I’ve seen many failed attempts on YouTube.

So before I began, I did the following…

1. Washed my hair thoroughly and made sure I removed all product build-up/residue.  (I used Kinky Curly’s Come Clean shampoo.)

2. Ensured my hair was soaking wet when applying the Knot Today conditioner and Curling Custard. I kept my spray bottle handy for that.

4. Raked the product through my hair thoroughly with my fingers

5. Only used a small amount of the custard.  Too much will cause residue.

I feel as if I did most of those things pretty well, but got a little lazy when I got to the back of my head.  You know how that goes. 😉

To be honest, I was under-impressed.  So much so I didn’t even take a picture of my hair when it was down.  I was too busy picking out the white residue that apparently resulted in using too much of the Custard.

It also took my hair over 24 hours to dry completely.  I attribute this to the use of too much Custard and the thickness of my hair. Obviously I have no control over the latter, but I still believe I was too heavy-handed with the Custard.

Also, because I didn’t distribute the product evenly enough, some parts of my hair were more defined than others and it looked like two different heads. 🙂

Since most of the residue was near the front of my hair, I did a quick rinse with my spray bottle and pushed my hair up into a puff. 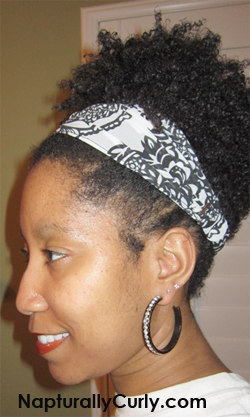 I was able to wear this for about a week.  Also, because the Curling Custard did a fairly good job of clumping my hair together, I was able to get my hair into a ponytail without gel and rock a cap for once.

I love hats and since I’ve been natural, I haven’t been able to wear them (hair too big).  So it was nice to be able to pull my hair back and wear a hat for a more casual look.

I’ve also accomplished one of my natural hair goals, and that was to get my hair in a ponytail.  Now, I’ll look forward to getting longer and even fuller! 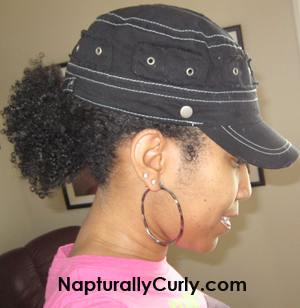 Every morning I would spray my hair with water to re-activate the product and my curls would just bounce back — just like the product said they would.

Even though I didn’t get the results I wanted, I will probably try it again.  Next time I will use less Custard and do a better job of making smaller sections in the back.  I started rushing once I got toward the end and it was obvious when my hair dried.

Parts of my hair were frizzy, others were very well defined.  I suppose I could have re-applied the Custard, but I was afraid of product overlap and more residue.

The Custard did a good job of defining my curls as you could probably tell in the pictures above, so it definitely does what it promises.

So overall it wasn’t a total fail.  I knew that if things went wrong I could fall back on a puff… and that’s exactly what I did! 🙂